On October 9, 1991 the Environmental Protection Agency (EPA) issued regulations for municipal solid waste landfills under Subtitle D of the Resource Conservation and Recovery Act. Subtitle D set forth and defined restrictions on facility design and operations criteria, ground- water monitoring requirements, corrective action measures, conditions for closing and performing post-closure care, and assurance for financial responsibility (Malia & Morrissey, 1994). These regulations were promulgated October of 1991 to be effective on October 9, 1993. The date was later changed to April 9, 1994 in an effort to ensure smaller landfills would have sufficient time to be in compliance (Malia & Morrissey, 1994). Albemarle Regional Solid Waste Management Authority (ARSWMA) was formed in an effort to manage the regulations set forth by Subtitle D.

The purpose of a regional solid waste management authority is to provide environmentally sound, cost effective management of solid waste, including storage, collection, transporting, separation, processing, recycling, and disposal of solid waste in order to protect the public health, safety, and welfare; enhance the environment for the people of the state; and recover resources and energy which have the potential for further use and to encourage, implement and promote the purposes set forth in Part 2A of Article 9 of Chapter 130A of the General Statutes (NCGA, 2012).

Subtitle D regulations were promulgated October 9, 1991 and were to be effective on October 9, 1993. This date was later changed to April 9, 1994 in an effort to ensure smaller landfills would have sufficient time to be in compliance (Malia & Morrissey, 1994). In early 1992 the Region R Council of Government, a group of ten counties, began to hold regional meetings to discuss solid waste management issues and opportunities. The group considered building its own landfills but faced public opposition. However, Addington Environmental, a company from Kentucky, decided to build a Subtitle D-compliant landfill in northeastern NC and worked to include the Authority in its plans. In September of 1992 the Albemarle Regional Solid Waste Management Authority was formed with seven of those counties. To transport waste to the ECE landfill, the counties needed transfer stations. In 1993 construction began on the Perquimans and Currituck County Transfer Stations and was completed in October of the same year. The existing county-owned landfills that did not meet regulation standards were closed at that time; this included the Dare, PCG and Currituck landfills. In July of 1993 the Authority signed a contract with East Carolina Environmental, Inc. a private waste management company owned by Addington Environmental, Inc. (now Republic Services). The original contract was for 20 years. However, in 2009 this contract was renegotiated for a contract period of 26 years. The purpose of this renegotiation was to establish better rates with Republic Services and to extend the period of the landfill contract. Figure 1 shows an abbreviated timeline of the events related to the organization of the Albemarle Regional Solid Waste Management Authority. In 2007 the Authority submitted an RFP in an effort to reduce costs related to the transport of waste. At that time the Authority decided not to enter into a hauling contract but to let Republic Services continue with its contract for transportation with Bowen Trucking. 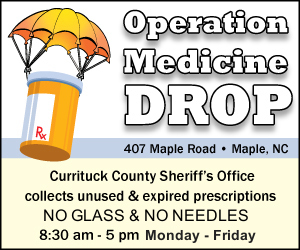 With the amount of trash North Carolinians throw away, we fill enough Dumpsters to line the N.C. coastline more than nine times every year.